Bangalore based historian, Dr. Vikram Sampath is the author of four acclaimed books: Splendours of Royal Mysore: the Untold Story of the Wodeyars; "My Name Is Gauhar Jaan: The Life and Times of a Musician"-­‐ and "Voice of the Veena: S Balachander -­‐ A Biography". His latest book is the first volume of a two-volume biography "Savarkar: Echoes from a Forgotten Past" from Penguin Random House India that has gone on to become a National Best Seller and was acclaimed by Prime Minister Narendra Modi. Vikram was awarded the Sahitya Akademi's first Yuva Puraskar in English literature and the ARSC International Award for Excellence in Historical research in New York for his book on Gauhar Jaan. The book has also been adapted to theatre as a play "Gauhar" by Lillette Dubey and is being adapted to a Bollywood film by Ashutosh Gowariker. Vikram was among the 4 writers and artists to be selected as a Writer-‐in-‐Residence at the Rashtrapati Bhawan in 2015. Vikram has a doctorate in history & music from the University of Queensland, Australia and is a Senior Research Fellow at the Nehru Memorial Museum and Library, New Delhi. He is also an Aspen Global Leadership Fellow, a Fellow at the (Wissenschaftskolleg) Berlin and an Eisenhower Global Fellow for 2021. An Engineer/mathematician from BITS-­‐Pilani and an MBA in Finance from S. P. Jain, Mumbai, Vikram is also a trained Carnatic vocalist. He has established the Archive of Indian Music, India's first digital sound archive for vintage recordings, is the Founder-­‐Director of the Bangalore Literature Festival, Indic Thoughts Festival and the ZEE Group's ‘ARTH-­‐ A Culture Fest’. 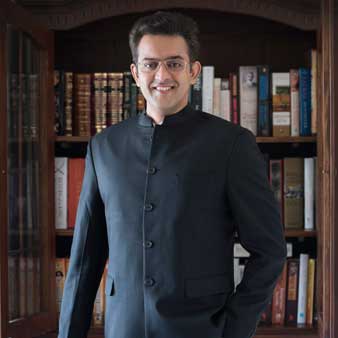 The Perils and politics of history writing in India

Truth to be told that a huge portion of India's magnificent History is missing from our academia. It's so Delhi driven. We don't think about the Ahom administration that governed Assam and part of Myanmar for 600 or more years. In the 2,000 years of Indian History, almost no has been expounded on South India too. Nuanced history is something that is deficient with regards to the present time. You are categorized and enclosed to some philosophical pail constantly. You are called upon to take positions and a name is put on you.

I think as a nation, we have no respect for history. We let landmarks disintegrate. We have no regard for documentation. We take characters of the past such a great amount into our heart—for what reason wouldn't we be able to permit Baji Rao to be a typical person who likewise engages in extramarital relations with a lady? For what reason do they need to be holier than thou who can't have any human indecencies?

More stressing that there is a cognizant endeavor to whitewash certain portions of History and more obscure parts of our set of experiences. On the off chance that you prevent the presence from getting certain issues, that turns into an issue. It is to be considered trusting that some other lawmaker will misuse that and the injuries burst open. This is actually what's going on in our nation.