Toby Walsh is a Scientia Professor of Arifticial Intelligence at the University of New South Wales in Sydney, Australia, and Fellow of the Australian Academy of Science. He was named by the Australian newspaper as a "rock star" of Australia's digital revolution. Professor Walsh is a strong advocate for limits to ensure AI is used to improve our lives. He has, for example, been a leading voice in the discussion about killer robots, speaking at the UN in New York and Geneva on the topic. He appears regularly on TV and radio. He has authored two books on AI for a general audience, the most recent titled "2062: The World that AI Made" which is available in Arabic, Chinese, English, German, Japanese, Korean, Polish, Romanian, Russian, Turkish and Vietnamese. The book has just been published in India by Speaking Tiger. 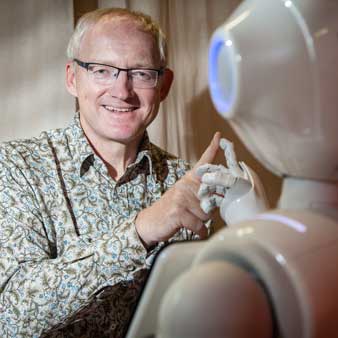 2062 is the year by which we will have built machines as intelligent as us. This is what the majority of leading artificial intelligence and robotics experts now predict. But what will this future actually look like? When the quest to build intelligent machines has effectively been successful, how will life on this planet unfold? Will automation take away jobs? Will robots become conscious and actually take over? Will we become immortal machines ourselves, uploading our brains to the cloud? How will political institutions adjust to the post-truth, post-privacy digitised world? What lies in store for homo digitalis – the people of the not-so-distant future who will be living amongst fully functioning artificial intelligence? But the most important question of all is what choices do we need to make today to ensure that the future remains bright?

As within a time AI takes over a large number of our errands, we will have more relaxation in future. It's very well known as the Second Renaissance. Contrasting the 1900-1960 period with 2000-2060, I feel there could be a greater amount of expansion in the term of the end of the week, and a more logical effect on our lives. In spite of the fact that AI will robotize numerous physical and psychological undertakings, it is impossible that it will uproot occupations like bike fix individuals, since it is a perplexing errand and may not be monetarily reasonable to computerize. The historical backdrop of innovation has been that a larger number of occupations are made than devastated by new advances. A few sorts of occupations will be just somewhat robotized. Mechanical robots, nonetheless, have decreased positions and wages also. Despite the fact that a maturing society will open up positions in the eldercare area, there might be expanded inclination for human help as opposed to robot partners. Inversion of the offshoring of occupations to non-industrial nations, on account of AI and mechanical technology, may antagonistically influence their fortunes.

A stressing advancement is "War 4.0" or using deadly AI weapons which can devastate human beings' existence and we shouldn’t pay for this. On the off chance that set of experiences has shown us a certain something, the guarantee of a clean war is and will probably stay a figment. Self-governing weapons further separate us from the demonstration of war and its ethical contemplations. Likewise with each other weapons of mass pulverization – substance weapons, natural weapons and atomic weapons – we should boycott self-governing weapons.