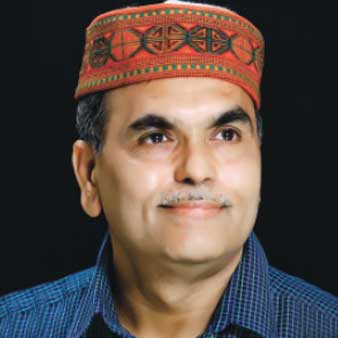 This novel "Vidrohi Sanyasi" discusses the life of Adi Shankaracharya. It’s first edition ended in just 2 months. Life story of Shankaracharya is very interesting, it has drama and emotions. It is so intriguing that whoever reads this book will suggest others read it. Modern youth publicity has helped a lot. If a man is reading, family members are waiting to read. Shankaracharya was born in the south but he spread the message of Vedanta to the whole world. My aim was to propagate his message to everyone. His message seems to have faded away with modernity. I have researched extensively to write this book to make it as authentic as possible. Shankaracharya faces all types of problems in his life as a normal youth will go through. Modern youth don't want to waste his life in battle of religion and castes. In these depressed situations, if anybody can save youth is the life of Adi Shankaracharya. We have smooth roads, cars and airplanes but that time Shankaracharya traveled all over India by foot. He knew his Guru was in a cave near Narmada, that too in childhood. In Vedic culture where our Rishis were research and scientists such as Kanad, Sushrut and many others. We invented many things including Zero. We are human and not machines. We are run by emotions and love. We need to know Adi Shankaracharya. He was sanyasi, not for himself, but for the welfare of people. He left his house, mother only for people and Culture. Looking at his saffron cloth people may think him a religious person but as he openly goes against evil practices of religion that's why he is called “Vidrohi".

Everyone must read to know more about Adi Shankaracharya.