Paro Anand writes for children, young adults and adults. She won the Sahitya Akademi Bal Sahitya Puruskar in 2017 for her anthology Wild Child (now published as "Like Smoke).[2] She has spoken about and written extensively on children's literature in India.[3][4] She headed the National Centre for Children's Literature, The National Book Trust, India, the apex body for children's literature in India. She also runs a podcast on HubHopper called Literature in Action,[5] and was an invitee to the India Conference at the Harvard Business School in 2018. She was awarded the Kalinga Karubaki Award for fearless writing, 2019.

She is well-known for her work with children in difficult circumstances including those impacted by violence in Kashmir and has written extensively on the subject.

Paro Anand is a Sahitya Akademi, Bal Sahitya Award winner for her book, Wild Child, now published as Like Smoke, with additional content. She has written books for children, young adults and adults. She also works with children, especially those in difficult circumstances through her program Literature in Action and holds a world record for helping over three thousand children make the world’s longest newspaper.

She was invited to speak at the Harvard India Conference, USA on Disruptive Innovation in Literature for Young Adults and Children. She has been awarded for her contribution to children’s literature by The Russian Centre for Science and Culture. No Guns at my Son’s Funeral, which opened to rave reviews, was on the International Board on Books for Young People Honour List, has been translated into German and French. She headed the National Centre for Children’s Literature.

The Little Bird who held the Sky up with his Feet was on the 1001 Books to Read before You Grow Up, an international gold standard of the world’s best books ever. Wingless has been performed nationally and internationally. She has co-authored '2' a graphic novel with Swedish writer, Orjan Perrson.

As a performance storyteller and speaker, she has represented India in the USA, UK, Sweden, Switzerland, Singapore, Germany and Bangladesh, besides all over India.

In 2019, she was awarded the Kalinga Karubaki Literary Award for Fearless Women Writers. 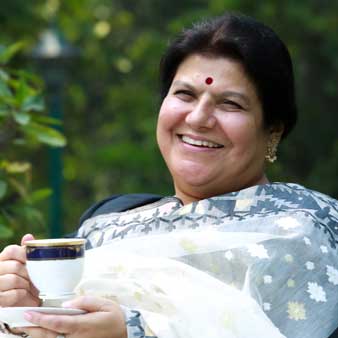 Ms Paro Anand is a well-known writer who has received many awards for writing books for children. She does not write only for children but also young adults and adults, but her books for children are more popular. The thing that puts her apart is that she writes stories which have been inspired by reality. Her penchant for writing real stories came when while telling a group of children a story about domestic violence she was asked by a kid whether the story was true. She asked the kid what he thought and she got the reply that it happens in my house. Several other children also said the same thing.

She was also asked by Dr. Abdul Kalam why she wrote such harsh stories for children and she answered that it was to make children learn to deal with reality. She stopped writing stories about ghosts and other fairy tales and sticks to write from reality

Panel on - Desire and Sexuality, an unseen side of Society (Educating the Educated)