Manjit Gill is a highly acclaimed chef with over four decades of excellence in the culinary profession.

With a mantra of “discovery & constant innovation” he is held in the highest regard by the Hospitality Industry’s top gastronomic echelons. Chef Gill has been honoured innumerable times for his formidable work with restaurant brand creation such as Bukhara, Dumpukht, Kebab & Kurry, Dakshin, Royal Vega – honestly plant based food and dairy on guidelinesof Ayurveda.

Lifetime Achievement Award from India’s Ministry of Tourism in January 2006.

Have the honor being the recipient of the prestigious “Escoffier Medal – for culinary commitment and high standards of the culinary arts & hospitality by the World Chefs 2018”.

Awarded the prestigious Paryatan Ratan by Panjab University in March, 2016.

Chef Gill is passionate in researching and applying the learnings of Ancient Indian Cuisine and a great believer in the sustainable philosophy of Indian Vedic knowledge and Slow food.

Did the Punjabi food research & promotions under various themes:

Among the various books authored.

As the President of Indian Federation of Culinary Associations, he got India to be a member of World Association of Chef’s Societies. Under his leadership “Chef & Child” was started, which today is an annual national event. First to have started National Culinary Art Exhibition and Competition in January 1990. Bocuse d’Or world championship is today a biannual programme by IFCA.

He is as former Corporate Chef ITC Hotels and continues to work as a Food Advisor with ITC Hotels.

In Manjit’s own words, “ In many respects my philo sophy on food and my life are same - bothshould be an experience of Happiness, Serenity and Joyful living. These principles have developed from a broad range of professional experiences as well as from contact with people of diverse cultures and Lifestyles. “ This truly reflects Chef Manjit’s perspective of food and life ”.

“My kitchen is a mystical place, my temple. It is where the learnings of the past transfer into the future.” 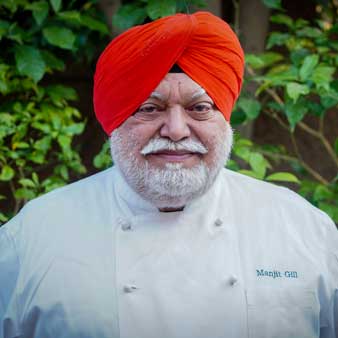 Fear mongers are progressively utilizing online media and Internet for different purposes including radicalization, giving preparation, passing on messages, pondering the terror stages and so forth Innovation is making it hard to follow and block their exercises as unraveling and unscrambling requires some serious energy. The initial step should be that the law implementation offices ought to have specialists in moral hacking and building up their own apparatuses in their own labs. Workforce should be prepared in digital advances, reconnaissance, covert tasks, cross examination methods, huge information investigation and furthermore the utilization of man-made brainpower. There should be an explicit ability advancement program for officials who are taking care of psychological warfare

We don't have appropriate reading material to instruct about our amazing Indian food. There is no wording for Indian food. Our foundations are showing just Westernized food. For instance, nobody even shows you how to make something fundamental like "paneer" (curds) in a logical and organized way. This human body needs various tastes as per the season, and there are six gastronomic seasons in India, with various produce being abundant for around two months. The entirety of this implies our food is continually evolving.