Kaumudi trained as a journalist in Bombay and worked as a reporter and feature writer there from 1990-1996. After moving to the USA, she had to put her career on hold as her spouse visa did not allow her to work. Instead she spent time learning about food, researching food history, writing two books for Indian publishers, and occasionally reporting on the USA for Indian media outlets. In 2001 she was still not legally allowed to get a job so she did what she wanted most: had a baby. For the next six years she focussed on raising her daughter Keya, volunteering at her school, writing fiction, and cooking her way around the world.

Two months after getting her green card in 2007, with an investment of $500 and an Apple laptop, Kaumudi opened Un-Curry, a cooking school and catering company that featured organic, regional Indian food and became the first person to set the record straight about Indian food in the west. She tested recipes during the day and at night, she wrote the manuscript for The Essential Marathi Cookbook which was published by Penguin India in 2009. She also wrote for publications like Paste, Forbes.com, LA Parent and mom.me; read and analyzed novels and scripts for eOne, a Los Angeles production company; and offered communications services to Public Storage and other corporate clients.

Kaumudi’s food memoir, Shared Tables: Family Stories and Recipes from Poona to LA (Speaking Tiger Books) was published in May 2017. Kaumudi currently works as senior book editor for America’s Test Kitchen in Boston, MA, and writes children’s fiction in her spare time. She also enjoys taking photographs of flowers wherever she happens to be and watching cinema of all genres. She is also at work on her first novel. 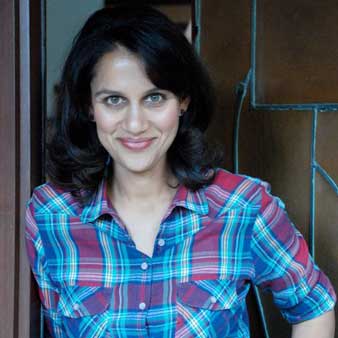 Let's Talk about Food as History in conversation with RJ Nisha

Looks cannot stop me. Rather I proceed to give the set of experiences behind each picture, here I give insights regarding my foundations, returning even to the appearance of my progenitors in India.

While doing ordinary errands, food isn't a long way from the table, in a manner of speaking, regardless of whether I'm discussing my grandma cooking her number one nourishments, or about fellowshipping with my recently discovered Armenian companion in the US, or testing Chinese food sources at a recently opened eatery. However, my solace food remains the tomato-coconut soup her grandma used to make for me. I'll favor hot rice and ghee would cheerfully be my last dinner!

I required Americans to understand what I knew; that Indian food was fluctuated and modern and finished and nutritious. I portrayed my cooking as intriguing however recognizable, encouraging yet audacious. It was anything but difficult to cook, when you had the essential procedures, and it could fit delightfully into American ways of life. My fantasy was for India's cooking to achieve the spot that Italian, Chinese and Thai food had accomplished in the American minds. Keeping that in mind, I considered a name that would be engaging, snappy and proper. Following fourteen days, I recollected an old thought I'd had. I asked my friend once, “Would you mind in the event that I utilized Un-Curried for the new business?”