Born in Allahabad, schooled for a time in the UK, Anjana Basu has to date published 9 novels and 2 books of poetry, The Chess Players and Other Poems from Writers Workshop and Picture Poems and Word Seasons from Authorpress. Her first poem was chosen for the Illustrated Weekly by the then Poetry Editor Kamala Das. Her poems have appeared in an anthology brought out by Penguin India. Since then she has featured in Kunapipi, The Blue Moon Review, The Phoenix Review, The Ginosco Review, the Salzburg Review, Prosopisia and Indian Literature, to name a few.. The BBC has broadcast one of her short stories. In 2004, she was awarded a Hawthornden Fellowship in Scotland where she worked on her second novel, Black Tongue published by Roli in 2007. She began writing for children in 2010 when Roli brought out Chinku and the Wolfboy. Her Jim Corbett series for TERI dealing with big cat conservation for children began in 2013 with In the SHadow of the Leaves, Leopard in the Laboratory in 2016, Eighteen Tides and a Tiger published in June 2017 and Hide, Seek Tiger published in JUne 2019 and the latest Lockdown Tiger in September 2021. Conspiracy of Aunts was brought out by Readomania. Her byline has appeared in Outlook and Outlook and Outlook Traveller. She has worked on the dialogues for the Amitabh Bachchan starrer The Last Lear directed by Rituparno Ghosh. Anjana Basu lives and works as an advertising consultant in Calcutta. 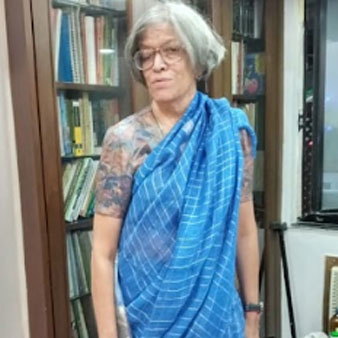