Abeer Kapoor, is a journalist, board game designer and author. He is the creator of India’s first election-based board game called ‘The Poll’, which has been featured in CNN, vice, the Diplomat and several other national and international publications. He is the author of 'The Most Notorious Jailbreakers' (Rupa, 2020), which has just been acquired by T-series for digital rights. His articles have appeared in Hardnews, the Wire, Scroll, Quartz and others. He is currently, building a new suite of games on 'digital citizenship' and writing a graphic novel. 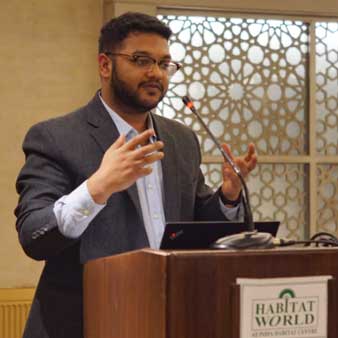 Panel on "Crime Fiction - an instigator or Inhibitor"

Abeer Kapoor: Crime Fictions are a gift of the Colonial period. British has actually a great font for detective crime fiction which gave rise to Sherlock Holmes so if you are in police you should have to read Sherlock Holmes. Detective fiction began in the Lahore area at the time of British. Bengal had its own version of Sherlock i.e. Byomkesh Bakshi. Crime fiction is rooted in reality. Detective stories have long histories in India. It has a long regional response too. For me crime fiction means history of place and time, history of people and region. England has done an amazing job in terms of Crime fiction. There is always a relation between a detective fiction, crime fiction and setting. The detective searches for clues, often makes mistakes, may identify the wrong party, but eventually solves the crime. The goal is for the audience to piece the clues together while the detective works.

Anuj Tiwari: My stories are inspired from true stories. The crime we face on a daily basis is motivation for me to write. Time has changed and story brands have been established. I would still like to read old crime fiction sold on railway stations because it still has a charm. All new stories, if you look, have their root in those old stories. Time may have changed but the core of the story will remain the same. We cannot count the importance of stories by the number of pages and its price but through the essence of stories. Crime fiction is bestselling genres and the most borrowed from public libraries. One of the reasons I believe crime fiction is popular is because people are fascinated by human behavior.

Tanushree Poddar: Crime fiction is actually challenging the readers to pick intelligence against the author. Maximum number of Twists makes the book more interesting. I must say that contemporary life is reflected in crime fiction. Crime fiction also tries to bring social issues at some point in the story. One of my books has highlighted many issues that exist in Bollywood. The atmosphere in which we write mysteries is very important. In one of my stories I created a fictional city of which idea I got while being on travel. Taking a story forward is a challenge.

Let's have a talk on Smugglers, jails and escapes...

The tales are set in a huge scope of time — from the 1940s to as late as 2016 — and investigate the cast related contentions of Uttar Pradesh and Bihar, to the criminal and cop syndicate in Punjab. Citing various scholars and news reports, I attempted to inject a feeling of credibility and desperation into the story, giving a chilling look at the ignoble real factors that convicts and jail staff need to face each day. The criminal here aren't the standard generalization who assault and murder without fluttering an eyelid. Or maybe, they are introduced as naughty, aggressive men who have the skill of vanishing into the group and turning into the conventional whenever they have gotten away. One of them additionally includes a previous Prime Minister of the royal province of Hyderabad! To elevate the charming story goes to and fro as expected, starting with the recapture after the escape, and afterward driving you to the day when the real wrongdoing occurred.

The part on Bitihotra Mohanty, false name Raghav Rajan, is apparently the most interesting in view of the sheer daringness of the occasions. I don't laud savagery, nor legitimizes the disturbed conduct. The law may set aside effort to get up to speed in any case, requital is unavoidable. In the event that criminals and prisons capture your consideration, this is the ideal break for a sluggish holiday evening.