Nandita C Puri was born in Calcutta and spent her early childhood in boarding school in the former French colony of Chandernagore. She studied in Calcutta and Bombay, majoring in English Literature and worked as a writer and journalist with several newspapapers like The Telegraph, The Statesman,The Times Of India, The Reader’s Digest and others. For nearly a decade she wrote one of the most popular weekly film column on cinema for Mid-Day (Potpuri) and India’s largest circulated daily, Dainik Bhaskar (Khaas Chehre). She has also worked as a broadcast journalist for All India Radio and Radio Network (with former BBC Chief Mark Tully) in Calcutta. She has written for television and feature films, having penned a typical Bollywood commercial film called Mera Dil Leke Dekho (2006) apart from a number of documentaries and shorts. However, her collection of short stories, Nine On Nine (published by Rupa & Co.in 2005) has been critically acclaimed and well received. It has gone into many editions and has also been translated in German at the 2006 Frankfurt Book Fair. Besides one of the stories has been included in the Sahetya Akademi Anthology of Indian writers. Filmmaker, Mike Nichols (Who’s Afraid of Virginia Woolf, Graduate, and Catch 22) wrote about nine on nine, “Nine on nine is fascinating because it is funny and full of life, the writing is a mixture of compassion and toughness, and it is really political writing in the highest sense. The closest I can compare this book is to Edith Wharton’s House of Mirth.

In 2010 Nandita published the biography, Unlikely Hero: Om Puri, which has been on the best sellers’ list and translated in several Indian languages including, Hindi, Malayalam, Punjabi and Marathi. The following year Nandita published her debut novel, Two Worlds (Rupa & Co), a historical romance spanning two centuries and several continents. The book was launched at the jaipur Lit Fest in the presence of Orhan Pahmuk. It was on the best sellers’ list for several weeks. Nandita Puri has been a member of the script committee of NFDC (National Film Development Corporation) and CFSI (Children’s Film Society of India) as well as a TEDx Speaker.

In 2017 she lauched the Om Puri Foundation at the 70th Cannes Film Festival in memory of her husband, internationally acclaimed actor Om Puri to carry his legacy and philosophy ahead. Currently she chairs the Om Puri Foundation. Nandita has been working and researching on the sensitive subject of “international child trafficking” and “inter country adoption” since more than three years now through the personal story of Jennifer Haynes. The book, Jennifer’s Story, is being published by Rupa Publications. She has also completed the screenplay, Homeless / Jenny Hoover (working title) based on her book Jennifer’s Story. 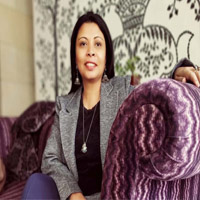