Kapil Sibal (born 8 August 1948) is an Indian politician belonging to the Indian National Congress party. A lawyer, he formerly served at the helm of various ministries in the Congress-led UPA government over the years – beginning with the Ministry of Science & Technology, then the Ministry of Human Resource Development followed by the Ministry of Communications & IT, and the Ministry of Law & Justice.

Sibal was first nominated in July 1998, as a Member of the upper house of the Indian Parliament, the Rajya Sabha, from the state of Bihar. He served as Additional Solicitor General of India (December 1989 – December 1990) and President of the Supreme Court Bar Association on three occasions (1995–96, 1997–98 and 2001–2002). In 2004 general elections, he won the Chandni Chowk constituency of New Delhi with 71% vote share. In 2014 general elections, he received 18% of the votes and trailed at third position for Chandni Chowk constituency, behind.

A graduate of Harvard Law School, an eminent lawyer and a senior politician. Kapil Sibal is presently a Member of Parliament, Rajya Sabha. Previously he was elected to RS in 1998 and for two consecutive terms to the Lok Sabha in 2004 and 2009. He has served as Union Cabinet Minister for Science & Technology and Earth Sciences, Human Resource Development, Telecom & IT and Law & Justice.

Sibal is known for his versatility. Apart from his emotive anthologies I Witness, My World Within, Shades of Truth, he also scripts lyrics for films. He is a prolific writer and his articles on topical issues in national & international dailies are widely read. 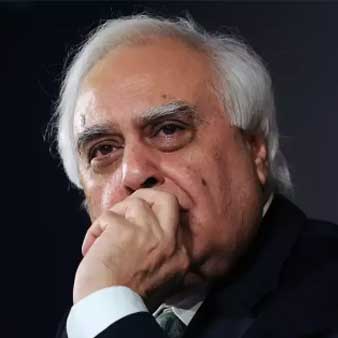 Damage Uncontrol: The Wake-up call for the Republic